The Holy Monastery of Dionysiou 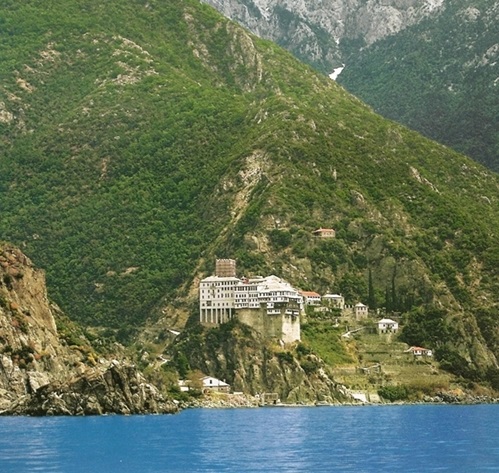 The monastery was founded shortly after 1370 by St Dionysios of Korysos near Kastoria, with funds provided by the emperor of Trebizond Alexios III Comnenos. The 25 metre-high tower was built in 1520, but the greater part of the monastery was destroyed by fire in 1535. The katholikon, dedicated to the Birth of John the Baptist, and almost certainly built in 1375, was restored after the fire. Its unusual Typikaria, or sacristries, seem to be the oldest of their kind on Mount Athos. The wall-paintings of 1546/47 are by the famous painter Tzortzis. The refectory was painted in 1603 by Daniel and Merkourios, who did much work elsewhere in the monastery. The treasury contains the ivory relief of the crucifixion, the cross of Helena Palaeologos and many other noteworthy relics.