The monastery in tradition and today 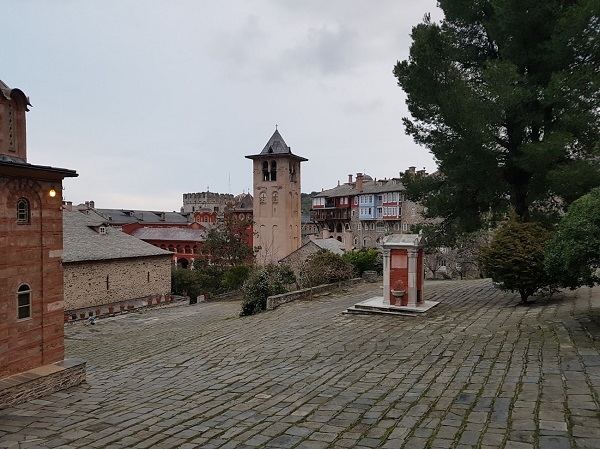 A place of sanctity; a place of quietude for a life far from cares, ideal to distance the mind from the concerns of life which impede its ascent to another sphere of existence – close to the One who has no beginning; close to the God who is the object of our love.

The observation of the historians that “the natural formation of the peninsula favoured, and indeed imposed, the isolation of its inhabitants1” is certainly true.

The sole access by land to the peninsula of Athos is its narrow western side, where even now remains of the canal of Xerxes, dug around 481 BC, can still be seen.

The terrain of the peninsula is rugged, covered with forests and ravines; it has thus naturally been a refuge for those who meditate on things above. However, the monks who live in this place are spiritually nourished not so much by the physical landscape and the other natural beauties, which indeed contribute to the peace and aspiration of the soul, as much as by the special assurances and blessings which have been given to them by the Mother of God, our Lady the Theotokos. Tradition relates that the Holy Mountain was given to her by her Son as her portion, just as portions were allotted to all the Apostles. Again according to tradition, the Theotokos herself during her lifetime visited Athos, disembarking at the port of Clement. We find this tradition set down as early as the end of the 15th century.

St Maximus of Vatopaidi tells us that: “The Mother of God then journeyed by ship to the Holy Mountain with the Apostle John, having first cast anchor at the place where the Monastery of Iveron now stands. From there they went on foot to the place where the Monastery of Vatopaidi is today. At that time unbaptised Greeks lived there… ”2 As soon as she disembarked on her allotted portion, miraculous events occurred, together with the conversion to Christianity of the majority of pagans who in ancient times inhabited cities here whose existence is known to us from the historians of antiquity3. Unfortunately we lack proof of the existence of Christians on Athos during the first centuries after Christ. In our Monastery of Vatopaidi there is a sarcophagus of Germanus, the son of a certain Heraclas, made in 203 AD and probably the last known trace of the pagan inhabitants of Athos4.

The Holy Mountain was called Acte by the ancients. During the early Middle Ages it was known as Athos, while from the 10th century on, the name of the ‘Holy Mountain’ has prevailed – this title originating not, as in the case of the earlier ones, from its geographical position or from the majestic peak of Athos, but from the immovable ‘mountains of the virtues’ which guide man to perfection. It is not clear when monastic life began on Mount Athos. The traditions sometimes are an expression of mystical yearnings, but at others they convey hidden messages. To the degree that historical testimony is lacking, these traditions do not constitute sources for history. But for the Church of Christ they are a joy to study, and usually at their core there is a truth which has often prompted scholars to embark upon important research which has led them to remarkable discoveries.

Even now, historical research on the subject is inadequate in the extreme – especially as the historians and chroniclers of old did not readily concern themselves with the details of monastic life on a distant peninsula5.

The first historical testimonies to the existence of monastic life on the Holy Mountain come from the Canon of St Joseph the Hymnographer, which was composed around 831-8416. In this, St Peter the Athonite is extolled in hymns on the occasion of the finding of his holy relics, while in his Life, which was written around the middle of the 10th century, we are told that the Saint lived an ascetic life on Athos in a remote cave for about 50 years with strict fasting, vigil, and prayer. In this way we know that the ascetic life was being lived on the Holy Mountain before the middle of the ninth century. The second ascetic known to us is St Euthymius the Younger, who to begin with was a monk at Olympus in Bithynia. However, he lived at different times on the Holy Mountain between 859 and 866, and later built the Monastery of Peristeron, south-east of Thessaloniki, around 898. From his Life, which was compiled by his disciple Basil, we learn that before the arrival of St Euthymius in 859, there were monks living on the Holy Mountain. We do not, of course, know when exactly they first arrived. Several of these monks, however, founded monasteries beyond the Holy Mountain; as, for example, in the case of John Colobus and the monastery named after him at Ierissos.

From the Life of St Euthymius it also emerges that not only monks in ones or twos were living on the Holy Mountain, but also ascetics in groups. After the foundation of the Megiste Lavra in 962 by St Athanasius, the coenobitic way of life greatly flourished. It is true that monasteries existed before the Megiste Lavra, but the scarcity of sources and the incomplete state of research at present do not allow us to determine when exactly they first made their appearance.