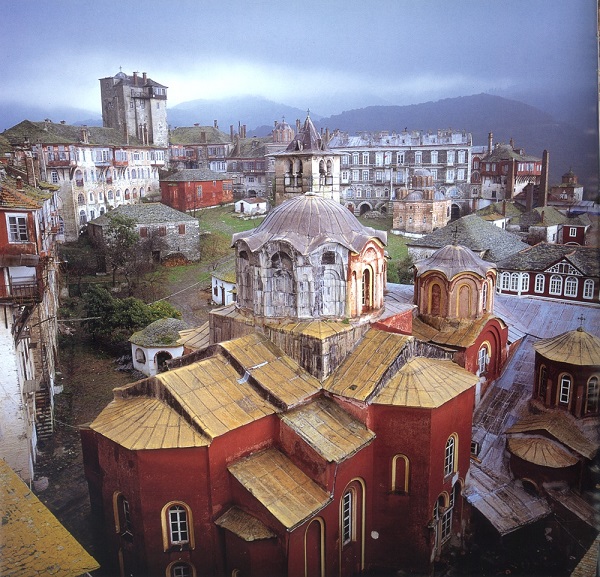 On the south-east side of the precinct, the masonry is similar to that of the Byzantine walls and towers which we have already examined. However, the type and the dimensions of the two intermediary towers differ from the intermediary towers on the northern side. These differences in the fortified precinct and its deviation from the normal parallelogram shape, which is maintained by its northern side, reveals that most probably the Monastery originally occupied a smaller area than that of today, and that it was bordered to the south by a wall between the Towers of Chrysostom and that of St John the Baptist. If this were the case, it is not unlikely that the bell-tower of 1427 stands on the remains of one of the two intermediary towers at the original southern side. Although it is not impossible that this original precinct belonged to the 10th century, the rarity of its shape, clearly reminiscent of later Roman and early Byzantine fortresses, calls for research to uncover details of a possible fortification of that period. Something like this would lend particular weight to the tradition that is transmitted by the patria according to which the beginnings of the life of the Monastery of Vatopaidi are to be sought in the Early Christian era. At all events this smaller and elongated original enclave also exhibits a notable similarity, so far as the general arrangement of the buildings is concerned (katholikon at one end of the interior and refectory in the middle), with a possible early phase of the Megiste Lavra.

The fortification complex at the entrance was modified many times during the history of the Monastery and today its considerable complication renders an understanding of it difficult. In earlier times the gate was probably located on the western side of the Tower of St John the Baptist and it seems to have been protected by an external wall, a part of which must still be at the southern end of today’s rampart. In the early post-Byzantine period, the gate was moved to the northern part of the tower on the ground floor of the building complex which was added then for this purpose, thus forming the passage of the entrance (L shape on the ground plan), which remained in use until 1896, when today’s entrance was opened up. This entrance was protected by a larger wall (the whole of the current one), to which the approach must originally have been through the large arched opening at the northern side, in front of the base of the Tower of St George Possibly at that time an older gate house approximately in the place of the present one which was built in 1645. Before the middle of the 18th century, however, the gate of the rampart had already been moved to its present position.