The Tomb of the Founders 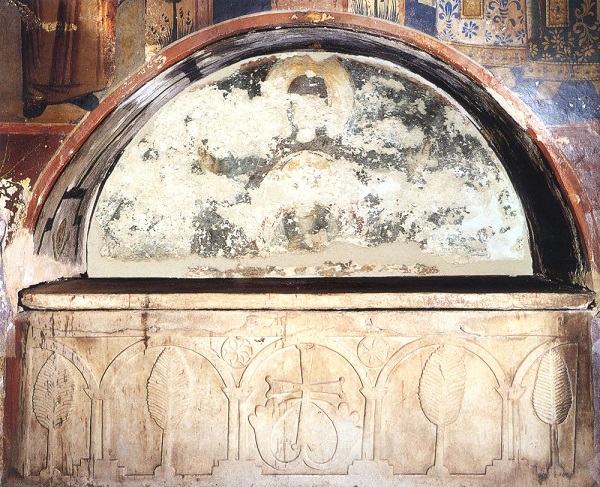 According to a tradition, which has survived down to our own times and is already recorded in texts of the 18th century, the founders of Vatopaidi are buried in a tomb beneath the arcosolium in the southern side of the mesonyktikon of the katholikon.

This tomb is first referred to by Ioannis Komninos in 1701. He maintains that it is the burial place of three noblemen from Adrianople, Athanasius, Nicholas and Antony, founders of the Monastery, “the same also having become monks at that place, and having lived out the days of their lives in a manner pleasing to God, fell asleep in the Lord; whose relics lie within the interior of the church’s narthex and who are commemorated twice in the year, on 17 December and on the fifth day of Pentecost”. Barskij reiterates much the same in 1744, but adds that while the tomb is never opened, a perpetual lamp hangs before it, as in fact is the case today. Indeed, it is well known that each day, after the completion of the cycle of services and of Vespers, the officiating priest reads a Trisagion before the tomb, while among the names commemorated from two books of intercession – one of 1801 and the other of 1869 – are those of the founders.

The tradition which links the tomb in the mesonyktikon of the katholikon with the founders of the Monastery found expression in their depiction on the facade of the wall above the arcosolium during the redecoration of the mesonyktikon in 1760. In addition to the depiction of the three historical founders of the Monastery, the noble Adrianopolitans, there are also, of course, portraits of the Emperor Theodosius, with his sons Arcadius and Honorius, together with his daughter Placidia, and finally the Emperor John Cantecuzenus. These are also regarded by tradition as founders of Vatopaidi.

The evidence as to the founders of the Monastery which we can draw from the published sources to date and from tradition has been supplemented and clarified by the findings of archaeological investigation which we undertook at the opening up of the founders’ tomb. It was proved that the tomb in the mesonyktikon of the katholikon is indeed that of the founders, since, as is evident from its masonry, it was constructed at the same time as the church. Originally, there was only a built underground cist beneath the arcosolium, which, by successive burials, was gradually transformed into a composite sepulchral monument. It is highly probable that the first person buried in the original underground cist was the Abbot Nicholas, who, on the testimony of documents, is connected with the founding of the monastery and he must have died between 1012 and 1018. This chronological period is also consonant with the style of the foliated cross painted on the arcosolium lunette. The ornate base upon which the cross rests has the appearance of a stylised capital, one that has affinities with capitals in representations in miniatures of the late 10th and early 11th century.

Once the relics of the first founder had been exhumed, the tomb was expanded into a two-storey structure, by the addition of a pseudo-sarcophagus above ground level, in which his remains were placed, while in the underground cist a second person must have been buried. In this way sepulchral structure with an underground tomb and a reliquary above ground took shape. The latter most probably was provided with a rectangular opening in its original wooden lid. This was a widespread burial custom in the Middle Byzantine as well as in the Palaeologue eras, practised in the case of saints or persons of distinction, connected with the veneration of their relics.

The second person buried in the underground cist and in turn removed to the pseudo-sarcophagus/reliquary above ground may be identified, on the basis of an inscribed lead tablet found among the exhumed remains.

It was the Abbot Athanasius, one of the immediate successors and a spiritual son, so it seems, of the first Abbot Nicholas. The text of the tablet reads as a kind of malediction, by which the Abbot Athanasius issues a command that the tomb should not be violated or that no one else should be buried in it, threatening the curse of the God-bearing fathers on whosoever should dare to do such a thing:

According to the archival sources, the death of Athanasius is dated to a time after the middle of the 11th century8. For this dating support is also found in the relief decoration of the marble facade of the pseudo-sarcophagus, which depicts a colonnade with a foliated cross in the centre and cypresses at the sides, motifs which we encounter in a series of sarcophagi of the 11th century.

Thus, archaeological research confirms tradition, at least as far as two of the figures, Nicholas and Athanasius, are concerned. They are cited as two of the three historical founders of the Monastery, and they can be identified with two important Abbots, as had been suggested earlier by Dionysia Papachryssanthou10, on the basis solely of information from documents.

A question naturally arises concerning the third occupant of the tomb, whose relics were found undisturbed at its lower level. If, however, we call to mind what Papachryssanthou suggests, namely, that tradition may also have included in the triad of founders an Abbot of the 12th century (1142) of the name of Antony11, then we might suppose it possible – naturally with every reservation – that the existence of three bodies in the founders’ tomb, a fact which must have been long known, contributed to the shaping of this tradition.

The wall-painting of Our Lady Vlachernitissa on the lunette of the arcosolium, which covered the upper part of the original decoration of the foliated cross, reveals a further intervention in the founder’s tomb. The Virgin is an early 14th century work, apparently forming part of the general wall-painting of the katholikon which was carried out at that time.