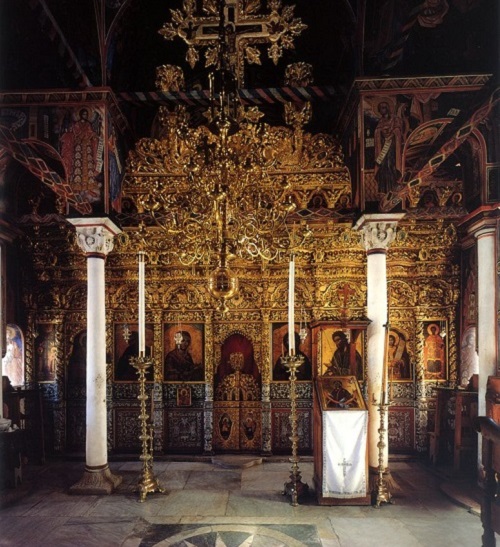 The old marble sanctuary screen which separated the sanctuary from the central nave of the katholikon in the Monastery of Vatopaidi would seem to have been one of the most notable screens on the Holy Mountain, not only because of its design, but also for the quality of its sculptured decoration.

Testimony to the presence of the marble chancel screen, in its original place, is first provided in 1700 by Ioannis Komninos1, and later, in 1744, by Barskij. The screen must have been dismantled between 1744 and 1788, at which time it was replaced by the later carved wooden iconostasis. Of the old marble sanctuary screen only the stylobate is preserved in its original place, together with two small colonettes of Skyrian marble, re-used, on the right and left of the Royal Doors. The remains of the sanctuary screen were incorporated into various buildings of the Monastery which were either built or renovated between the end of the 18th and the middle of the 19th century. Thus, two parts of the original epistyle, of white marble, have been used anew as frames for the Royal Doors of the Chapel of the Holy Girdle (1794). The facades of the epistyles are embellished with continuous small arches which frame acanthus-style palmettes (the ‘Asia Minor ornament’) and with a series of circular borders enclosing five-leafed palmettes. Sculptured decoration also covers the lower surface of the architrave, which is divided into compartments containing lozenges surrounded by complementary circles and rosettes, foliated crosses, complexes of circles with birds, and intersecting circles. The two double-headed eagles have been carved at a later date on the formerly semi-wrought surfaces of the epistyles which rested on the capitals.

Another two fragments of the epistyle, with themes similar to the previous ones, have been re-used as cornices over the lintels of the south and east entrance of the refectory of the Monastery, which assumed its present form in 1785. The four closure slabs of the sanctuary screen have found new places in the portico of the exonarthex of the katholikon (1842). They are identically paired and both are ornamented on their main sides with superimposed lozenges, inscribed in rectangles, which are flanked on the outside by a winding vine tendril and by birds in champlevé technique. The facades of the other two screen slabs are divided into panels, which are covered by interlacing geometrical designs.

The four columns which, in their new capacity, support the dome of the Chapel of the Holy Girdle, were also parts of the old sanctuary screen. The columns are crowned by historiated capitals, with representations in high relief of eagles in the four corners and pierced bosses in the middle of the sides. Finally, pieces from the chamfered cornices of the closure slabs, in pink Eretria marble, which must have belonged to the old sanctuary screen of the katholikon, have also been identified. On the basis of the existing traces on the stylobate and of the subsidiary measurements, it is possible to reconstruct the original chancel screen diagrammatically. From the evidence of the existing stylobate, it seems that the screen stood in front of the western end of the partition walls of the sanctuary and extended without interruption from the north to the south wall of the church. This format is reminiscent of a number of early Christian sanctuary screens dating from the period of Justinian onwards, as in the basilicas of the Erechtheum, Aegina, and the Katapoliani on Paros. Of course, we also have the usual tripartite division of Byzantine sanctuary screens but here it is achieved by the differentiation of the relief ornamentation of the epistyle. In the middle section, there are, on the facade of the architrave, small consecutive arches framing acanthoid palmettes, while on both sides we have a series of intersecting circles enclosing five-leafed palmettes. The main sanctuary screen had two large openings, while the side sections had two narrower openings each, corresponding to the partition walls of the sanctuary and to the doors of the prothesis and the diakonikon.

The sanctuary screen was crowned by a wooden epistyle of the early 13th century. It bore a representation of the Great Deisis and scenes from the Twelve Great Feasts, sections of which are preserved in the Monastery’s sacristy.

The marble parts of the screen perfectly match the openings of the sanctuary and the traces of the colonettes on the stylobate. Moreover, the relief decoration on the screen shows uniformity of subject-matter and style with the reliefs of the katholikon still remaining in situ, such as the slabs in the partition wall between the exonarthex and the narthex and the lintel of the Royal Doors. These details prove that the screen was constructed from the outset for the katholikon of Vatopaidi and was not made of materials used previously. Consequently, the screen can be considered as chronologically contemporary with the construction of the church, which together with the foundation of the Monastery is dated to sometime between 972 and 985.

This dating, between the third and fourth quarters of the 10th century, is confirmed both by the style and the subject-matter of the decorative relief on the screen. As we have seen, this is chiefly of geometrical or floral motifs enclosed in circles or incorporated into rectangular compartments, together with foliated crosses. This sculptured decoration has been executed in varied techniques: Kerbschnitt, à jour, and champlevé. We encounter similar themes and techniques in sculptures of this era from Constantinople and Asia Minor. As examples, one could cite the stylised acanthus-shaped palmettes in their cruciform arrangement on the lower face of the epistyle. With their marked relief work, these stylistically match the palmettes to be seen in sculptures of the northern church of the Lips Monastery in Constantinople. In addition, the historiated capitals are related directly, with respect to the plasticity of the forms of the eagles and the quality of the execution, to the capitals of the mullions in the Lips Monastery, which have similar ornamentation. Of the remaining decorative details it is worth noting the small arches on the facades of the epistyle, as well as of the lozenges on their lower surfaces, which are analogous principally to Early Middle Byzantine epistyles from Asia Minor.

Thus, the close relationship of the sculptures of the chancel screen of the katholikon of Vatopaidi with those of the Monastery of Lips in Constantinople, as well as with the epistyles of Early Middle Byzantine sanctuary screens in Asia Minor, demonstrates that the construction of the screen constitutes an expression of the artistic creativity of the Byzantine capital and its sphere of influence, during the period of the ‘Macedonian Renaissance’.