The Built Environment in the More Distant Areas 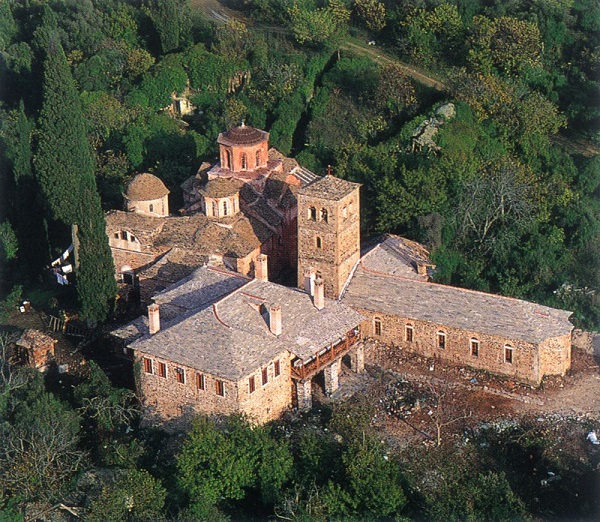 The dependencies of the Vatopaidi Monastery are numerous and differ in size and significance. The most important are the Sketes of St Demetrius and of St Andrew, some of the kellia, the old Athonite Academy, and the Kolitsou tower.

The idiorrhythmic Skete of St Demetrius is in a wooded and mountainous area, half an hour on foot to the south-west of the Monastery. It stands on a slope of triangular shape, which on its north-western and south-western boundaries is crossed by the beds of two seasonal rivers. The Skete is an ekistic unit consisting of 25 kalyves scattered around the kyriakon and the refectory. The earliest known reference to the Skete dates from 162862 and tells us that the ancient monastic house (monydrion) ‘tou Chalkeos’ stood on the same spot.

No information on the foundation of the Byzantine kyriakon church has survived in the sources known to us. The tessellated marble floor of the nave, which dates from the 11th century, puts the kyriakon among the oldest churches on the Holy Mountain belonging to the Middle Byzantine period. It is a composite cross-in-square church with choirs (of the Athonite type) and a narrow narthex, which in all probability had the catechumena on a floor above it. The church has undergone important alterations and additions, chiefly since the end of the 18th century. It was probably at that time that repairs were made, chiefly to the facades, the roofs, and the central dome, so that it could serve the needs of the newly-constituted skete. In 1755 the interior walls were decorated, and in 1796 the original narthex was widened by turning it into a domed lite, with two columns in the middle which divide the spacious area into six compartments. This was followed by the addition of the low, ground-floor exonarthex, whose wall-paintings were executed in 180667, and, on the north, around the end of the 19th century, of a domed compact cruciform chapel dedicated to St Nicholas. On the south-west of the kyriakon, and adjoining it, is the two-storey building of the dikaiaton, the residence of the Dikaios of the Skete. It has the typical layout of a house at a kelli, with its own chapel, dedicated to the Dormition of the Theotokos, on the upper floor, and a large balcony to the south68. The refectory is the third building in the kyriakon complex. It is long rectangular building with the kitchen on the east and a bell-tower above the entrance at its north-western corner. According to the inscription, it was built in 1888. The Skete’s cemetery chapel, dedicated to the Nativity of the Blessed Virgin, was built in 1764.

Today the Skete presents a picture totally different from that of the late 19th and early 20th centuries, when it was in full operation. At that time it had its own flour-mill and the kyriakon complex was ringed by the kalyves with their carefully tended gardens. The almost complete desertion of the Skete in the post-War years resulted in the abandonment of most of the kalyves, which then fell into ruins.

In the more general area around the Monastery there is a host of scattered kellia , standing on their own or in loose ekistic groupings such as that of Kolitsou, the Aighyptadika, and Skamni tou Igoumenou (Illus. 21). All the kellia , like the kathismata, have their own churches, the great majority of which belong to the compressed cruciform type in sundry variations and have their apse inscribed in their eastern wall. As a rule, they are covered by a flattened or semi-cylindrical dome. Some of the kellia were well organised, with separate buildings for the stabling of animals, the storing of hay, and the housing of workshops. To the east of the Monastery and around the Byzantine Kolitsou tower, which stands in a dominant position on the top of a hill, there are seven kellia : the Presentation of the Our Lord, All Saints, St Stephen, the Archangels, St John the Baptist, St Anne, and, a little further to the south, St George. The tower probably occupies the site of the the Byzantine Kaletziou Monastery. All that remains today are the solid outer walls of the multi-storeyed rectangular tower, with the remains of the buildings which surrounded it. It had four floors and a cistern in the basement. The top floor, which must have had a vaulted roof, had a small chapel.

On the right bank of the Platanari brook, which forms the mainstream of the river which reaches the sea to the west of the Monastery are the scattered kellia of St Hypatius, of St Procopius, of the Dormition of the Theotokos, and of St John the Evangelist. That of St Procopius has a Byzantine church, dating probably from the 12th century. It is of the composite cross-in-square type with a narthex, and catechumena with a chapel on the floor above. It has not retained its original dome and there have been considerable repairs and alterations to its initial form. The two-storey kelli which adjoins the western side of the church dates from the mid 19th century and has a building which is a multi-purpose workshop.

The two kellia – of St Nicholas and of the Prophet Elijah – which are known as the Aighyptadika or Yiftadika, are perhaps named after some Egyptian monk who lived the monastic life there.

In the north-western part of the region of the Monastery, in the direction of the Kalamitsi bay, there are no kellia . The few isolated buildings here, such as a stable, the Tavrokalyvo (‘the bull hut’), and the keramydenia (‘tiled’) kalyva, have some connection with the cultivation of the olive orchards, woodcutting, and stockbreeding. We also hear of the existence once of ten hesychasteria in the Kalamitsi area.

The imposing Skete of St Andrew (Fig.179) most probably occupies the site of the Byzantine monastic house (monydrion) ‘tou Xystrou’. Until the mid 18th century it was a kelli dedicated to St Antony. Two Patriarchs of Constantinople, Athanasios III Patelaros (1651) and Serapheim II (1761) settled there in their retirement. Each in turn restored the building, while it was the latter of the two who gave it its present name. The size and wealth of the kelli were such that it was given the name of Serai, that is, ‘little palace’. The church on the top floor of the kelli, with its layout in three parts, side apses inscribed in the walls, and a dome with a low drum, resting on octagonal support, is particularly fine. The old kelli, apart from the three-storey row of chapels, was completely gutted by fire in 1959.

In 1842 the first Russian monks began to arrive. These gradually took over the adminstration of the kelli, and in 1849 a sigillium of the Patriarch gave it the status of a skete, which from its inception was coenobitic.

From that point on, the Skete developed rapidly both economically and in terms of its buildings. Its influence spread beyond the bounds of the Holy Mountain, and it had its own metochia in Constantinople, St Petersburg, Odessa, Kavala, and elsewhere. It was one of the largest monastic institutions on the Holy Mountain, completely self-sufficient in the production and processing of its own goods. The size and magnificence of its kyriakon put it among the greatest churches in the Balkans. Today, the Athonite School is housed in one of its wings.

In Karyes, the administrative centre of the Athonite community, the Vatopaidi Monastery has four dependencies: three kathismata, one of which is its ‘konaki’ – accommodation for its representatives – and a shop building. The latter is on the corner of the Protaton square, abutting on the Byzantine tower, and used to be the representatives’ lodging. It has three shops on the ground floor and living quarters on the floor above. It dates from 1850. The delegates are now housed in a three-storey neo-Classical building of large dimensions, with a three-arched porch and a domed single-space chapel, dating from 1882, at its south end. The other two kellia are dedicated to St Charalampus and the Ascension, respectively.