The building complex of the Monastic Precinct 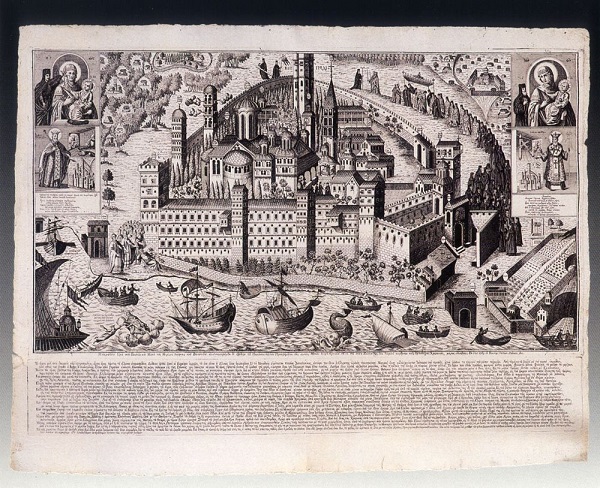 The building complex of the Monastery of Vatopaidi has changed its form many times in its thousand-year history. However, unlike the majority of Athonite monasteries, whose precincts assumed their final dimensions during the 18th and 19th centuries, Vatopaidi (and for that matter, the Megiste Lavra) appears already to have reached its present size as early as the Byzantine period. The line of the medieval fortification is preserved almost in its entire perimeter, together with remains of the majority of the towers, and is embodied within the intricate mosaic of the later building mass. But apart from the perimeter of the fortifications, the katholikon, and a few other buildings, today nothing else is obvious from the medieval image of this great monastery. In this brief text we shall attempt to give an outline of the building history of the complex as it can be understood from only a superficial observation of the buildings. In depth investigation of the buildings and details of their construction has not yet taken place.

Broadly speaking, the precinct of the Monastery has a triangular shape. Its northern part is defined by the three sides of an elongated parallelogram, parallel with the sea, and the shape terminates to the south with two further sides at the intersection of which is located the great Tower of the Transfiguration on the highest point of the terrain. A particular small enclosure (that of the infirmary), approached from behind the katholikon, was attached in the middle of the 19th century out from the eastern side. All of the large wings of the southern part were constructed after the end of the 18th century, while in the northern part buildings at least two centuries older have survived. They, however, were altered at the end of the 19th century. These general findings also agree with the old drawings of the Monastery which we know from a group of copper engravings of the 18th century, which show a bare wall to the south. The triangular shape of the precinct and its towers is also described in the old texts which contain the historical traditions of the Monastery (the so-called patria). The oldest of these texts, in that it concludes with the benefactions of the prince of Wallachia Neagoe Basarab (1512 – 1521), gives us, perhaps, the shape that these traditions had taken in the middle of the 16th century. In the copper engravings, many small buildings inside the courtyard are shown and are named. The majority of these buildings have been lost: “the holy church of St Christopher”, behind (south of) the katholikon; “the church of the Aghioi Anargyroi”, “the infirmary”, “the mangipeion (bakery)”, three structures to the right of the bell-tower, from the south to the north; “sacristy and storeroom”, a two-storeyed building with a lower annex in front; “the kitchen” to its left; “the coppersmith’s shop” to the right; “the vaïnareio (wine store) and oreio (wheat store)” below; all of them behind (south) of “the trapezarion” (that is, the refectory); “the chartoulawall. This catalogue of buildings lost from the courtrion”, and a two-storeyed construction near the western yard is corroborated and enriched by information from the written sources.