Post-Byzantine Buildings to the Middle of the 18th Century 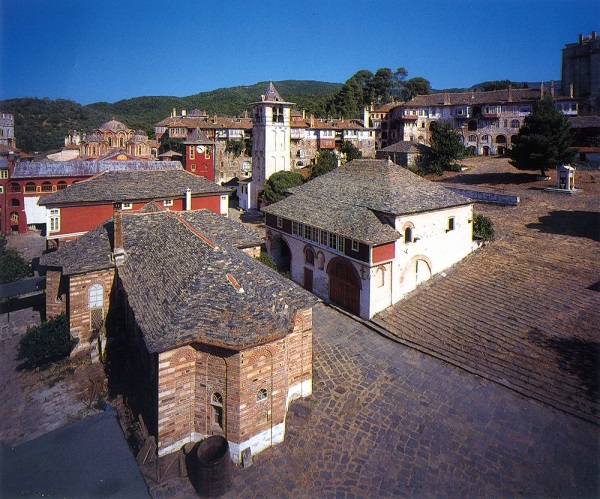 The early post-Byzantine period is represented by many interesting buildings which we shall describe briefly, in view of the limited scope of this article. Of the structures that the patria ascribe to Neagoe Basarab we can identify today the Tower of Our Lady, as well as the old kitchen which was demolished in 1894 but is shown in a photograph dated 1883. The Tower of Our Lady, one of the most striking fortification structures of the early 16th century on the Holy Mountain must, in its first phase, have been lower than at present. Probably it would have reached to the level of the perimetric machicolations where now the Chapel of the Nativity of the Theotokos is located. At its lowest level it housed two mighty cannons which were used to protect the slightly earlier (1495/6) and effectively unfortified arsanas of the Monastery. The chapel and the storey above belong to a second phase, which can be dated to the 17th or beginning of the 18th century. Included among the buildings of the 16th century should be the joint docheion (oil store)/sacristy (not including the 1636/7 extension outside its northern side), as well as that of today’s wine store in the north-west corner of the precinct. The southern wing of the wine store originally housed the vordonareio (stables) which was removed in the late the 19th century during the opening up of the present gate of the Monastery. The stables were originally a long two-storeyed building with large transverse arches on the ground floor which carried the wooden floors of the upper storey (today only the western wall survives), with large double rectangular windows. There were similar windows also in the eastern wall of the upper floor, as can be seen in an old photograph of the mid 19th century by Sevastianov. The patria also attribute to Neagoe Basarab “the wheat stores” and “the ourion” (wheat storerooms) as well as the “oinocheion” (wine cellar). These two areas were probably located in front of the stables in the courtyard, but may have stood on either side of them, at their southern and northern ends respectively. In 1654 reconstructions took place in this latter area – at the western end of the northern wing – and, according to its inscription, the new building (with the superimposed arched doxata) housed an infirmary. The central part of the northern wing had been renovated a little earlier in 1644, and later in the projects of the 17th century, its eastern part must have also been constructed. These last two buildings also have superimposed arched doxata with tile ornamentation. To almost the same period must be dated the two multi-storeyed narrow buildings with the superimposed arched doxata, built in the form of towers on the inner side of the eastern wall (corresponding to its two towers) and later embodied in the wings of 1815 and 1818. It is very possible that these are the two buildings that dominate the eastern wall in the copper engravings of the 18th century, bearing the names of its two towers.