Buildings of the Byzantine Period 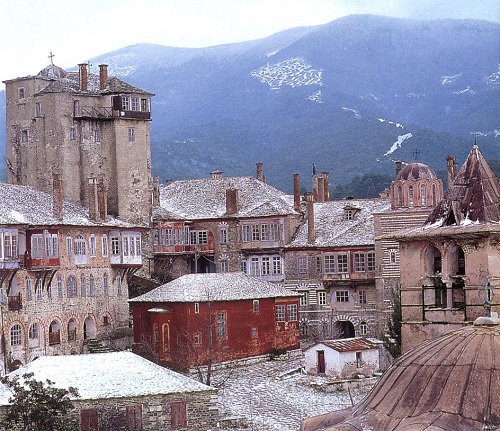 Apart from the walls and the towers which we have described above – and, of course, the katholikon – there are two other surviving buildings of the Monastery which date from the Byzantine era: the Chapel of the Aghioi Anargyroi and the bell-tower. An inscription of 1319/20 incorporated today into the western facade of the exonarthex of the katholikon refers to the reconstruction of the refectory of that time and of the olive press, a building that may have been connected to it in some way. Of the Byzantine refectory we cannot at present give a further assessment, apart from the fact that it was evidently equipped with the marble tables which were later installed in the present refectory (of 1785) and that it most probably stood on approximately the same site. The Chapel of the Aghioi Anargyroi is a small three-aisled basilica with wall-paintings apparently of the 14th century but over-painted in the middle of the 19th, when extensive repair work was undertaken and gave the building its present shape.

The church was connected with an infirmary which survived to the north of it probably until the middle of the 19th century. It is not impossible that this infirmary had some connection with the one which is cited as among the benefactions of the Serbian Despot John Uglesha in the chrysobull* at Simonopetra, dated 1368. At all events, Uglesha is depicted in the wall-paintings of the narthex (1847) as a founder, together with St Sabbas of Chilandari whom the written tradition of the Monastery regards as a founder of the church. The bell-tower of 1427 is today the only one of Byzantine origin on the Holy Mountain. Its elegant structure takes the form of two zones of high-shafted, blind arcades on the outside walls, and it has a large two-lobed opening in each of the sides at the highest level. Its wooden roof, possibly a model for many other Athonite bell-towers, is not unlikely to be of later origin.