The Typikon of the monastery 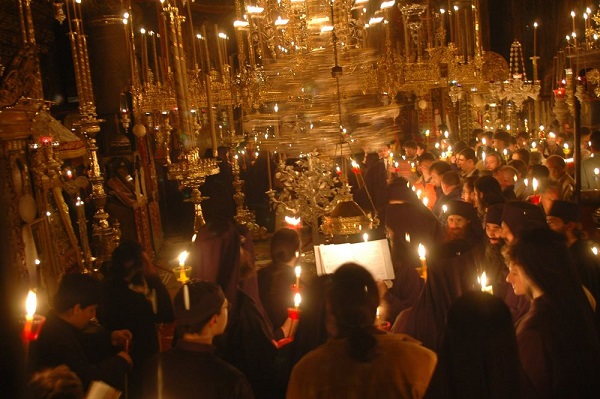 The spiritual labour of the day in its attempt to acquire the divine virtues prepares for the nocturnal revelation in the known yet most unknown world of divine worship.

A knowledge of and contact with this world of the spirit demands an appropriate spiritual sensibility, which in the monastic life is not difficult to develop, because it is the locus, par excellence, of this divine paradise of the mind where the religious soul can bring forth whatever is most beautiful, whatever is most noble, whatever is most godly.

Within the katholikon of the Monastery, with its history of more than a thousand years, it is possible for the soul, through the same words, to take part in that reasonable worship which has been offered unceasingly by the fathers before it and continues to be offered in the same way, worshipping God with all creation through the Church “with one voice and one heart.”

The uncreated light of the Divinity with its manifold energies shines brightly upon the mind and the heart of those who look towards it with longing.

The monk prays in the spirit; he prays also in the mind. The worship of God is not a work of man, it is a mystery which makes apparent the depth of its heavenly glory to those who transcend human reasoning.

Divine worship is the action of the Holy Spirit within the Church. “Moved by the Holy Spirit, holy men of God spake,”15 – those who were responsible for composing her first liturgical typikon. Through this act the entire intellectual and reason-endowed creation, now empowered, raises to the heavenly Father an everlasting song of praise.

As can be seen from the testimony of the manuscripts, that same spirit also moved the hearts of the holy founders of the Monastery, who from the beginning displayed particular interest in this reasonable worship, in the Monastery’s liturgical typika.

The first testimony goes back to St Athanasius in 1021-1022. On his instructions a manuscript was written containing the “four canons of the Most Holy Theotokos for the Offices of Compline in the Monastery.”

A second testimony is the manuscript Typikon of 1297 devoted to the Monastery of Vatopaidi16. Furthermore, in the library of the Monastery there are 11 manuscript typika dating from the 13th century onwards.

The basic typikon which was followed by the Monastery, as it was by every Athonite monastery, belongs to the great family of Typika of Jerusalem, as enriched and adapted in Constantinople, principally by the monks of Studium17. In none of the typika from the 13th to the 15th century is there any note by the scribe indicating any particularity in the Monastery’s liturgical typikon. Perhaps this means that initially the Monastery had arrived at the use of this typikon without variations; or perhaps there were notes on the typikon in various manuscripts or codices.

In the manuscript Typikon No. 1207, dated 1508, which for two centuries constituted the basic manuscript Typikon of the Monastery18, there is a special chapter on the readings at various feasts, where we find sermons by St Gregory Palamas (26 October), Daphnopates (7 January), and Acropolites (21 May), the Life of St Euthymius of Thessaloniki (14 October), and the Typikon of the Monastery of Petra (Constantinople) for the feast of the Annunciation. In the margin of the folios of this manuscript, a later typikares (17th or 18th century) has added some notes, as, for example, on f. 83 concerning the eve of the Annunciation (“if it falls on a Saturday”, etc).

In 1739 the Monastery produced a fair copy of cod. 1207, thereby creating cod. 1206, a faithful copy of 1207, and the marginal notes of cod. 1207 were interpolated into the typikon’s provisions. In addition, a table of the sermons to be read was provided. For example, for the feast of the Holy Girdle, the reading of a sermon by Germanus of Constantinople and another by Euthymius Zegavenus is proposed.

The many miraculous icons, the sacred relics, various historical events, and the teachers and composers of church music have all contributed to the fashioning of a Vatopaidi Typikon whose chief expression is to be found in cod. 1577, of the year 1869, which describes itself as an “Ecclesiastical Typikon according to the now prevailing order of our Holy and Great Monastery of Vatopaidi resulting from long experience and many notes made by those who at various times has served as ecclesiarchs* (typikaraii), collected by a brother of this Holy Monastery of Vatopaidi.”
Notes and provisions concerning the Typikon, apart from those in the manuscript typika described above, exist in a good number of manuscripts19.

From a very early stage in the history of the Monastery, a special liturgy in the katholikon was added every Tuesday for the wonder-working icon of Our Lady Vematarissa or Ktitorissa, in memory of the finding of the holy icon after its concealment for 70 years within the well of the sanctuary20.

In cod. 292, f. 28v it appears that Psalm 78 (79): “O God, the heathen are come into thine inheritance …” was added to the opening of Matins when the notorious pro-Latin Patriarch John Beccus had Euthymius, the Abbot of the Monastery, drowned, and 12 of the Monastery’s fathers hanged.

The holy water blessing on the first Sunday of each month with a procession of Our Lady Vematarissa is referred to by St Maximus the Greek (late 15th century)21. It would appear from the office of the newly-discovered St Evdokimos of Vatopaidi and from certain prescriptions of the Typikon relating to the feast of the Annunciation, that prominent personalities who lived at this Monastery shaped individual provisions of the Typikon. Thus, the bishops Chrysanthos of Smyrna and Grigorios of Adrianople instituted the commemoration of St Evdokimos of Vatopaidi, while we find a note made by Grigorios, Bishop of Eirinoupolis and Vatopaidi, in 1817 in connection with Easter and the Annunciation falling upon the same day: “If it happens that the Annunciation falls on the Great Sunday of Pascha because of the grandeur of this festival, which in this Monastery is celebrated with pomp, the office deviates from the common interpretation of the typikon, and let none marvel at this …” (cod. 1206r). Moreover, Grigorios of Adrianople, or Byzantios, who was deacon to the martyr Kyrillos, instituted a feast of some splendour at Vatopaidi in honour of the latter-day martyr Theodore of Byzantium, who was his brother according to the flesh22.

In the Monastery’s own festal calendar there are four principal celebrations, which took on their final form during the 19th century.

The fact that the katholikon of the Monastery is dedicated to the Annunciation of the Blessed Virgin called for observance of this day as a great feast, as also did the possession of the great treasure of the Holy Girdle of the Theotokos. Furthermore, the discovery in 1842 of the sacred relics of Blessed Evdokimos of Vatopaidi became a focal point for all of the brotherhood of Vatopaidi and the strange manner in which they were found made them an object of pilgrimage for the whole Athonite community. Thus a third, minor, feast was instituted on the day of the finding of these sacred relics (5 October 1842).

It is certain that a complete study and investigation of the Vatopaidi typika by specialist scholars will be carried out, because the great number of the manuscript menaia, triodia, pentekostaria, festal sermons, theotokaria and of other manuscripts will provide interesting information about the liturgical typikon of the Monastery created in centuries past out of a longing for the reasonable worship of our God and Father, Who is from all eternity.