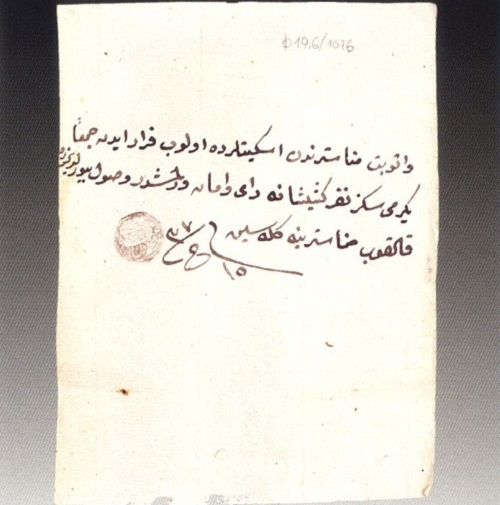 Among the treasures which are preserved in the monasteries of the Holy Mountain we must also include the Turkish documents which have survived from the era of the Turkish occupation1. Constituting primary historical material, they are still virtually unknown in their entirety, and are especially valuable for investigations into the history not only of the Holy Mountain, but also more generally of the Greek nation. The praiseworthy diligence of the monks in safeguarding all of the documents that are kept in the archives of their monastery, rather than destroying them, has resulted in the fact that a large number of documents from the beginning of the Ottoman expansion into the Balkan peninsula has been preserved. In the monasteries of the Holy Mountain it is possible for the researcher to discover documents of the early Ottoman period which, from many points of view, are extremely rare and precious. The documents of any Athonite monastery usually cover without interruption the entire period of the Turkish occupation. Any gaps which, on some occasions are encountered, are chiefly due to destruction by fire. The Present State of the Archive
The Turkish archive of the Monastery of Vatopaidi consists of two specific sections: a) the unbound papers; and b) those found classified in containers, corresponding to their contents. Almost all of the documents are in good condition; only a few have deteriorated somewhat as a result of damp or the worm. This writer has assembled and classified in five large files those documents found scattered in various dossiers or packets2. The classification was made according to the type of the document and in chronological order. On each document has been noted the number of the file, the number of the document in the file, and the general number of the classification. Not one of the Turkish documents of the Monastery has been published to date.

The majority of the documents in the first section (the unbound papers) are described on the reverse in pencil as “worthless”3. It is apparent that, in the past, Turkish-speaking monks attempted to separate out those documents which they considered necessary to prove the Monastery’s ownership of various properties, reckoning the remainder to be worthless; but they did not destroy them. In many instances those ‘worthless’ documents are in fact the most interesting.

A large number of the documents are accompanied by translations made at different periods, or by notes related to their contents. These are not always accurate and they need to be checked , in since those who wrote them were not well versed in either the Turkish language, or in Arabic script, or even in the history of the Ottoman empire and its institutions. Neither were they usually in a position to read fully the texts of the documents or to comprehend their contents.

Categories of Documents
The Turkish documents of the Ottoman period may be segregated into categories, which correspond chiefly to the service departments of the Ottoman administration which produced them. The firmans, that is, the edicts which were issued in the name of the Sultan and bear his ‘tugra’ (the special cypher with the name of the Sultan and of his father), are the most official. They bear on a host of subjects; principally, however, they have to do with administrative and taxation matters. The Monastery of Vatopaidi has in its collection more than 150 documents of this type. The oldest, in a later redaction, is dated 1405 (the year Hicri 807). The oldest text in the original is of 1425 (H. 828). Among them are also included six berat, three of the 18th century and three of the 19th, of large dimensions and with superb decoration. They concern the appointments of the Metropolitans Gennadios of Korytsa, Ioakeim of Korytsa, Grigorios of Stromnitsa, and then of Adrianopole, Meletios of Tyrnovo, and Gerasimos, Patriarch of Alexandria. All of these must have died at the Monastery and bequeathed their personal documents to it.

The most numerous documents are hüccet, decisions of the court of justice which the cadi (the Muslim judge) of a particular region issued. These chiefly concern donations of property, purchases, disputes over the ownership of a property among monasteries or their dependencies (metochia) and the inhabitants of neighbouring villages, permits to repair churches and buildings of the Monastery, and a plethora of other concerns chiefly of a juridical nature. The documents of this type number more than 400. They date from the year 1474 (H. 878) and later.

In addition, there are some 25 ordinances of the civil and military administrators in a certain region (buyruldu). A handful, about ten, are excerpts (süret) of the Imperial Cadastral Office (Defter-i HakanÈˆ), yet they are highly informative since they assign the sum total of the Monastery’s land holdings to different periods. There are also approximately fifty fetva, opinions by the expert on matters pertaining to Islamic law, the mufti. A significant number of documents is made up of certificates, affidavits, titles of ownership, passports, letters, receipts, and other similar documents, issued by the variously-named officials of the Ottoman administration.

The number of documents classified as poll tax certificates is also considerable. They are the receipts for payments of poll tax, which was paid by all non-Muslim citizens of the Ottoman state.

These receipts began to be issued from 1691 onwards. From that time until the repeal of the capital tax law in 1839, the monasteries of the Holy Mountain were obliged to pay for a fixed number of these receipts each year4. These were handed over to the Holy Community and then shared among the monasteries in proportion to the number of monks at each one. They bore five or six large seals with specifications of the tax (date, category, area, etc.), and they needed to be supplemented with the name of the taxpayer. But this rarely occurred. The poll tax certificates number in excess of 500, consequently they were not counted together with the rest of the documents.

Also enormous is the number of receipts for the payment of various levies that were imposed, such as: the ‘wine-and-raki’, the tithe, fishing licence, customs duties, sheep and goat flocks, tradesmen’s licence, and so on. Finally, there is an abundance of documents from the end of the 19th century which were issued by Ottoman service departments.

The Contents of the Documents
The issues with which the Turkish documents of the Vatopaidi Monastery are concerned, regardless of their category, are similar to those which one encounters in the Turkish documents in all of the Athonite monasteries. The majority of them refer to matters related to the management of the dependencies of the Monastery: the ones most commonly met with are those which have to do with the purchase of property or its dedication, certificates of tax collection, instructions to various Ottoman officers that they should not impose levies greater than those demanded by law, disputes between the Monastery and the inhabitants of neighbouring villages or the dependencies of other monasteries, and the determination of monastic property boundaries.

Of significance for the history of the Vatopaidi are the permits for repairs or for the construction of new buildings both in the Monastery itself or at its dependencies. These were normally granted by a firman or a hüccet. From numerous documents, mainly hüccet, we can derive information about various incidents that affected the life of the Monastery, such as shipwrecks in its region, assaults on or injuries to monks or to other people, and compositions in financial disputes. A number of documents do not seem to be directly related to Vatopaidi, since it is not mentioned; perhaps they belonged to individuals who later became monks. Among the most interesting documents are a firman of the Sultan Murat II (1421-1451) dated 1425 (H. 828), which instructs a sancak bey to treat the monks of the Monastery of Vatopaidi in the same way as they were treated in the time of the Sultan’s father, Mehmet I (1413-1424); a hüccet dated 1474 (H. 878), by which Mara, the daughter of the Serbian Despot George Brankovic, wife of the Sultan Murat II and stepmother to the Sultan Mehmet II the Conqueror, donates a house in Constantinople to the Monastery; the orders of Ebu Lubut Mehmet Pasha, who had been sent by the Sultan to suppress the Greek revolution of 1821 in Macedonia, whereby the dispersed monks of the Monastery were permitted to return unimpeded to their monastery, and their property which had been confiscated was also returned to them. There are many others, which will be listed in the forthcoming publication of the complete collection of the Monastery’s Turkish documents. In that it is one of the largest monasteries on the Holy Mountain, the Monastery of Vatopaidi preserves a correspondingly large number of Turkish documents. Their investigation will provide the specialist scholar of the history of the Turkish occupation with a plethora of hitherto unknown but valuable data, which from many perspectives will clarify not only the history of the Monastery in the post-Byzantine period, but also that of the other monasteries of the Holy Mountain, as well as that of the Greek world in general.