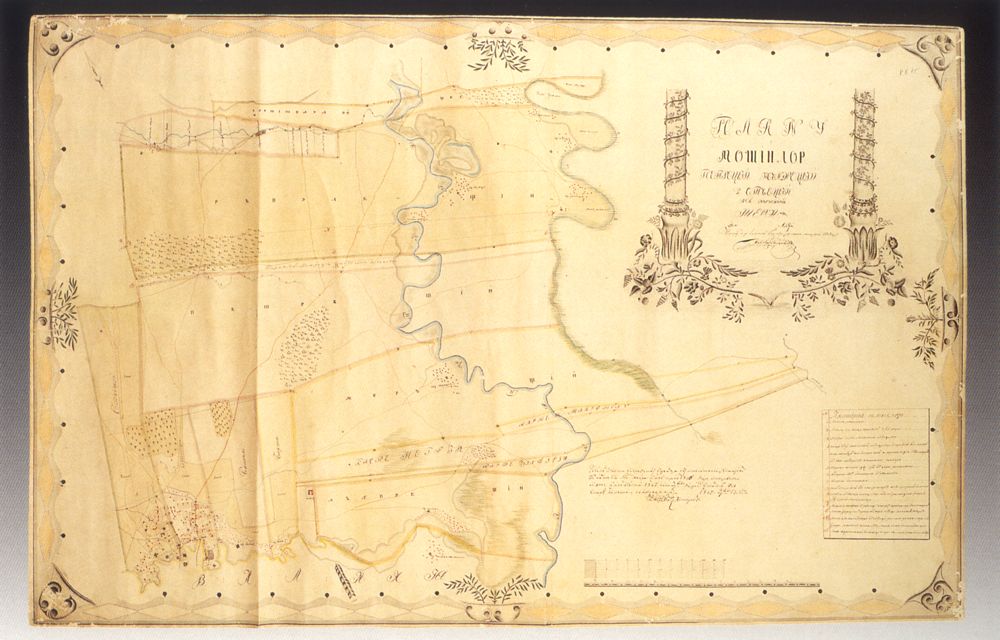 The Romanian archive of the Holy Monas¬tery of Vatopaidi is clearly the largest on the Holy Mountain.

Contents: 12,650 documents, 25 scrolls, 45 maps, and plans of landed property, 150 registers written in Greek and in Romanian containing chiefly matters of economic interest which relate to the Golia Monastery, six manuscripts written in Romanian constituting the principal dedicatory documents of each dependency – either in extensoor in summary – and one codex with translations into French of important documents. Of the entire collection of documents, around 80 are written on parchment and of these fifty are with wax seals, many in excellent condition. Approximately one third of the documents contain brief descriptions written in Romanian. In the year in which scholarly work on the texts was begun, the documents were still kept and grouped, chronologically and by subject, in a wooden cupboard. All the documents had been in 84 files, except for the sealed ones, which were allocated to eight other separate files numbered I to VIII, awaiting restoration and a special place for their safekeeping.

Classification of the Documents according to Language
The Romanian archive contains: 11,020 documents written in Romanian, 874 in Greek, 464 in Russian, 285 in Slavonic1, ten in German, seven in French, five in Turkish, four in Armenian, one in Italian, one in Serbian, one in Hungarian, one in English, and one in Hebrew. Of the documents of the 15th century, the 16 (both originals and copies) issued by Stefan the Great may be singled out. In spite of the fact that they are not concerned with the Monastery of Vatopaidi, their number is considered to be significant. Stefan was the first Romanian prince to grant a benefaction to the Monastery, by building its large arsanas*.

The first document chronologically is that of 24 July 1428, issued by Alexander the Good, Prince of Moldavia (the original survives, written in Slavonic, as well as two copies). The last document bears the date 19 October 1939 and is a receipt written in Greek.

Classification of the Documents by Sender
We have distinguished between the following categories: Ecumenical Patriarchs; exarchs of the Holy Mountain; representatives of other foundations; the fathers of Vatopaidi; Tsars of Russia; princes of Moldavia and Wallachia; metropolitans of Moldavia and Wallachia; bishops of Moldavian cities; monks of Romanian monasteries; titular bishops; local nobles of the Principalities, whether of Greek or of Romanian origin; and other categories of laymen. Of those from fathers of Vatopaidi, we may note here the name of the Abbot Grigorios, whose document was written in the first half of the 17th century2; the Prohegoumenos*, of the same name, who signs two documents of 1797; the Pro-he¬goumenos (in 1680), Serapheim. Of a later date, we have identified the priest-monk Danil, Prohegoumenos of Vatopaidi but later Abbot of Rakitoasa in Moldavia, a metochi* of the Monastery of Vatopaidi. In Moldavia he was active for nearly three decades (1833-1860) as abbot of the metochia in that region. There is also Archimandrite Dionysios from Ainos, well-known for his other activities, such as the silverplating of metal objects, gifts of silver vessels and of precious objects, all of them made in Moldavia3, to the Monastery of Vatopaidi. Of the other archimandrites of the Monastery, we may single out Païsios (1742), Philaretos (1840), and Kyrillos (1864). The priest-monk Gerasimos (1837) and the exarch Nikiphoros (between 1750 and 1759) complete the list of the Vatopaidi fathers who are mentioned in the documents of the Romanian archive. Particular mention should be made of the Metropolitan Grigorios of Eirinoupolis, a great figure among the monks of Vatopaidi, who was charged with the general management of the property of the Monastery in Moldavia and Bessarabia from 1802 until his death in 1846. The Romanian documents testify to his presence there between 1809 and 1840. Other fathers are also referred to in other documents of the archive. They come under the more general titles of elders, commissioners, exarchs, or priests4.

Metropolitans, bishops, and abbots of the monasteries of the Danubian Principalities

The abbots of those Moldavian monasteries which were dedicated to the Monastery of Vato¬paidi are included among the senders of documents. We give below some of their names by metochi, noting that many were Greeks sent by the Athonite monastery: at Rakitoasa, Gavriil (in 1745), Gerasimos (between 1796 and 1814), Parthenios (in 1831), Daniil (between 1838 and 1839), Neophytos (in 1718), Nikodimos (in 1776), Archimandrite Mitrophanis (in 1792), Methodios (between 1800 and 1803), Archimandrite Sophronios (from 1829 to 1832); at Myra, Mitrophanis (in 1729), Archimandrite Serapheim (in 1782), Zacharias (in 1814). The list could be continued with the Abbots of the Monastery of Barboiu, St Demetrius of Galatsi, the Skete of Grajdeni, etc.
We shall now deal with the Tsars of Russia and then the princes of the Romanian Principalities who are numbered among the lay senders of documents.

As to the princes of Moldavia, their number comes to 67 in a total count of 1,567 documents, while those of Wallachia number 18, issuing 28 documents in all. In order to keep the length of this text within bounds, we shall not enumerate all of the voivodes by name, but only a few. First of all, we should mention Stefan the Great (1457-1504), the prince whose donation to the Monastery of Vatopaidi was the building of the arsanas in 1472. The 16 documents (six originals and ten copies) deal chiefly with matters of gifts or with ratifications of property which at some time came into the possession of the Monastery of Vatopaidi. A similar number of surviving documents (15) were issued by another Prince of Moldavia, Alexander La˘pusneanu (1563-1568), who provided economic support for the Monastery. By Athonite standards, the number of documents (68) signed by the notable voivode Peter the Lame (1574-1591, with interruptions) is considerable. And of those of Jeremias Movila (1600-1606 and 1615-1616), the earliest documents of dedication to Vatopaidi survive; one of them, in fact, that of 1606, written in Greek.

Of the princes who assumed power in the 17th century, the figure of Vasile Lupu (1632-1653) stands out. His name appears on 120 documents in the archive, both originals and copies. Lupu was the practitioner par excellence of a policy of an imperial nature and examples of it can be seen in his dealings with the Monastery. Members of the Cantemir family (Constantine and Antiochos), princes who ruled between 1685 and 1707, supported the Athonite monastery in a variety of ways, as is made evident by the 126 documents in our archive. The donations, the dedications, the ratifications of previous aid granted by the Phanariot princes were impressive both in their size and in their frequency. In the archive we also encounter 560 documents issued by members of the Ghikas, Mavrocordatos, Rakovitsa, Kallimachis, Mourouzis, and Ipsilantis families, and many of them have a very official character, almost of an imperial kind. Even the princes of later times, such as Michael Stourza (1834-1849)6, also assisted the Monastery of Vatopaidi or its metochia*. Other Categories of Senders
We note by way of indication: the political or administrative leaders of the Principalities; municipal authorities of cities or towns, priests, cantors, monks, the councillors of other religious houses, members of Phanariot families, the local nobility of Moldavia or Wallachia, Greeks or members of Romanian branches of Greek families, villagers, freemen or vassals, slaves, and gypsies.

Classification of the Documents by Subject-matter

Again we quote indicatively: dedications of monasteries, churches and sketes, as well as donations and alms to the Monastery of Vatopaidi; matters relating to the assets of the Monastery in the Principalities (gifts of property, exchanges, certificates, attestations of boundaries, documents of local authorities concerning disputes, dowry agreements, lease contracts, reports to the princes and the decisions of the latter, receipts for payment, summaries of older documents concerning the agricultural land belonging to the metochia, plans of estates, wills, family trees, etc), correspondence of representatives of the Holy Mountain or of the Vatopaidi fathers with the civil, administrative, religious, and judicial authorities of the Principalities (chiefly after 1821 and until 1863), subscriptions to Greek and Romanian periodicals, disputes with representatives of other religious houses of the Orthodox East, the movement of monks from and to the Holy Mountain, and documents of a political nature7. Indeed, the variety of subject-matter will become increasingly apparent during the investigations into the entire corpus of the Romanian archive.