The Wall – Paintings of the Katholikon 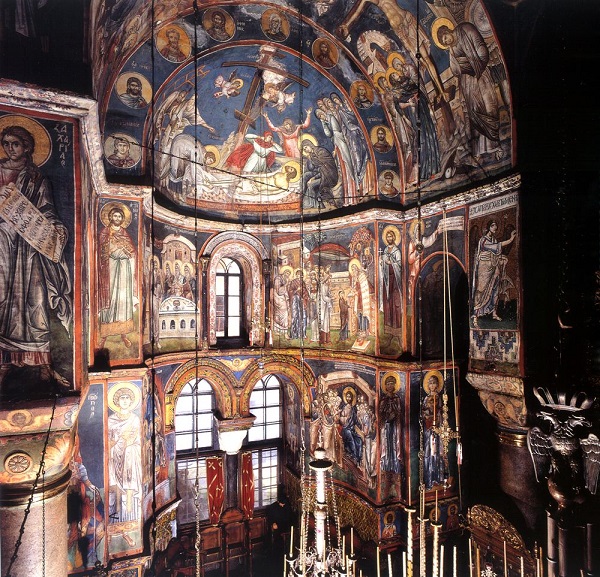 The Monastery of Vatopaidi, the first mention of which occurs in a document of the year 985, has links with the founder of the Megiste Lavra Monastery, St Athanasius. The Monastery’s founders are said by tradition to have been Nicholas, Athanasius and Antony, wealthy nobles from Adrianople, of whom very little is known. The building of the katholikon is put in the early 11th century. Architecturally, it is of the composite cross-in-square, four-columned type with a dome and side choirs. More specifically, the arch and the apse of the sanctuary are covered by a layer of painting of 1652, below which it has been established, during restoration work on the wall-paintings, that an older layer of decoration, perhaps that of 1312, has survived.

The dome of the church and the pendentives are covered with paintings of 1739, which in artistic terms belong to the trend to return to and imitate the painting of Panselinos in the Church of the Protaton at Karyes on Mount Athos. Below the layer of 1739 no older layer of painting has survived – at least at the points where an investigation has been made. The exonarthex (mesonyktikon*) of the katholikon has wall-paintings of 1760, beneath which it has been discovered that the layer of 1312 has been preserved, to an extent as yet unknown. Also in the exonarthex, a layer of painting of 1819, the work of a vernacular artist, Veniamin, and his associates from Galatista in Chalcidice, co-exists with the wall-paintings of 1312. In spite of the presence of the layers of painting of a later date, the greater part of the katholikon is covered with wall-paintings which date from 1312, as an inscription of 1819, preserved in the exonarthex, testifies. In the first part of the inscription we are told that: “This sacred church was painted in the reign of Andronicus the most orthodox king Comnenus Palaeologus by the subvention of the priest-monk kyr Arsenius in the year, ,ςωκ’ [1312] of the indict …”. This text of the modern inscription, which we can be sure reproduces the text of the donor’s inscription as to the decoration of the katholikon in the time of Andronicus I Palaeologus, which has been lost, is of particular importance because it preserves the date of the execution of one of the most notable pieces of wall-painting of the Palaeologue renaissance which survives today.

Investigation carried out at various selected points of the exonarthex has not revealed a surviving layer of painting older than 1312. Nevertheless, in early October 1993, during the cleaning of the wall-paintings of the eastern part of the church, four figures of prophets and two saints in medallions came to light on the intrados and faces of the arches which link the south-eastern and north-eastern column with the pier walls of the sanctuary. These wall-paintings, which show St Florus and St Laurus and the prophets Elisha, Ezekiel, Jonah, and Samuel, appear to belong to a layer of painting of the second half of the 12th century. More specifically, the type of the figures of the saints and the prophets, the way in which the face is rendered, the fleshless bodies with the flat treatment of the folds of the garments are encountered in types and modes familiar in the painting of the period, as can be seen from a comparison of the prophet Jonah (Fig. 196) with St Niphon at the Patmos Monastery (1176-1180)10, the prophet Elisha with the Apostle Paul at Martorana, Palermo (1146-1151), and the prophet Ezekiel with the Apostle Andrew, also at Martorana. The whole of the painting in the exonarthex and of the katholikon was covered by a thick layer of soot, which rendered it inaccessible for study. For that reason, references to the wall-paintings of the katholikon of the Vatopaidi Monastery have been limited and are connected – on the basis of the photographs of Millet – with their use as comparative material for the discussion of problems of iconography, rather than to achieve progress on issues concerned with the artistic trends in monumental painting in the Palaeologue period.

The 10th Inspectorate of Byzantine Antiquities, at the wish of the new community of monks which established itself at Vatopaidi in 1989, has undertaken, in collaboration with the Restoration Directorate of the Ministry of Culture and with the wholehearted support of the Abbot, the Most Reverend Archimandrite Ephraim, the cleaning of the wall-paintings of the katholikon. Following the principles which were initially laid down, it was decided in the first stage to remove the soot and experimentally to remove the later over-paintings.

The cleaning of the wall-paintings in the katholikon confirmed that the Palaeologue paintings in the exonarthex have survived in very good condition. On the other hand, the wall-paintings in the nave were discovered to have been painted over for the most part. This over-painting involved, in accordance with the ideas of the time, the ‘renewal’ of the painting on the faces, hair, and garments, but nonetheless retained the iconography and the design of the compositions and of individual figures. Thus, in spite of the fact that the compositions and the individual figures retain their original design, the genuineness and freshness of the painting has been lost and the expression on the faces has been altered. At the same time, it was discovered that in the case of certain scenes or individual figures the original painting had been replaced by later work on new plaster. In the compositions this substitution is partial, but in the case of individual figures it can be total. Thus in the Transfiguration, the upper part of the scene with Christ and the prophets belongs to a later layer of painting, while the Apostles belong to the original layer of 1312.

A similar phenomenon is observable in the case of the scene of Pentecost, but in the Nativity of Christ, the Raising of Lazarus, the Entry into Jerusalem, the Descent into Hell, the Resurrection, etc., the replacement of the original painting by later work is limited in area. The over-painting and replacement of worn or obliterated sections of the original decoration of the nave can be concluded to be, on the basis of technical characteristics and evidence from inscriptions, the work of an artist and his assistants carried out in 1789. An inscription which is preserved above the lintel of the entrance, from the exonarthex to the nave informs us of the reason and date of the restoration of the painting in the church: “This, formerly damaged and fallen the victim of time, was painted at the expense, by the diligence, by the love of the devout and reverend priest Ioannis from the castle of Gisvoros with Christodoulos and Vasileios all dearest to him when dominus Philotheos was sacristan in commemoration and everlasting memory in the year ,αψπθ’ [1789]’. In spite of the alterations to the decoration of 1312 brought about by the interventions of 1789, a considerable number of figures have survived intact, and this allows us to form a clear picture of the art and of the high quality of the painting of the artists who worked on the decoration of the nave.