The Mural Mosaics of the Katholikon – Introduction 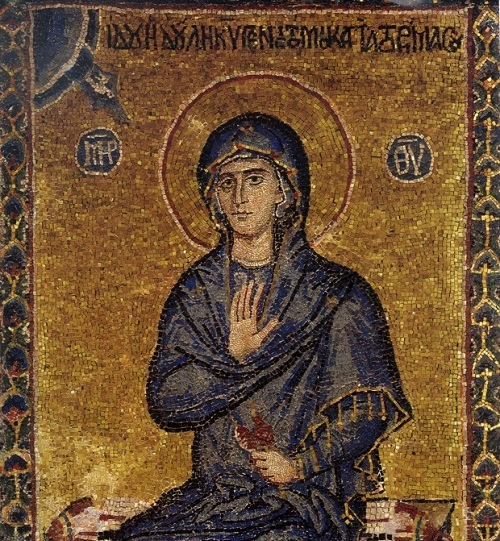 On the Holy Mountain, mural mosaics have survived only in the katholikon of the Vatopaidi Monastery. These mosaics, which are limited in extent and subject-matter, but are of high artistic quality, are not well know because of their poor state of preservation. As a result, there was no special study devoted to them until 1994, although there had been brief accounts of them, of which we would mention that of Weigand, contained in the Dölger-Weigand album on the Holy Mountain, and the comprehensive article of Xyngopoulos on the mosaics and wall-paintings of the Holy Mountain, included in the second volume of Millenaire du Mont Athos.

The surviving mosaics in the katholikon of the Monastery are made up of four separate subjects: two with the scene of the Annunciation, one with the Deisis*, and one with a bust of St Nicholas – belonging to three different periods. The scene of the Annunciation in the nave and the Deisis* on the lunette above the entrance to the narthex from the exonarthex have been dated to the 11th century, but they are not contemporaneous works. More specifically, the Annunciation has been ascribed dates between the beginning of the 11th and the beginning of the 12th century, while the depiction of the Deisis is dated to the late 11th or early 12th century. A second depiction of the Annunciation flanks the mosaic of the Deisis, arranged on either side of the same entrance to the narthex. This has been dated to the late 13th or early 14th century. Another mosaic, showing a bust of St Nicholas, is to be found on the lunette above the entrance to the chapel dedicated to him, which is incorporated into the south-west corner of the katholikon. There were in the narthex of the katholikon, according to information supplied by the proskynetarion of Ioannis Komninos of 1701, other scenes in mosaic, showing, inter alia, “some of the kings and founders of the monastery”. These mosaics, for reasons unknown to us, were destroyed and replaced with wall-paintings during the restoration of the narthex in 1843. Today, there are in the Monastery’s sacristy two chests containing tesserae, which must come from the mosaics of the narthex which have not survived.